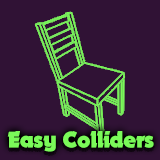 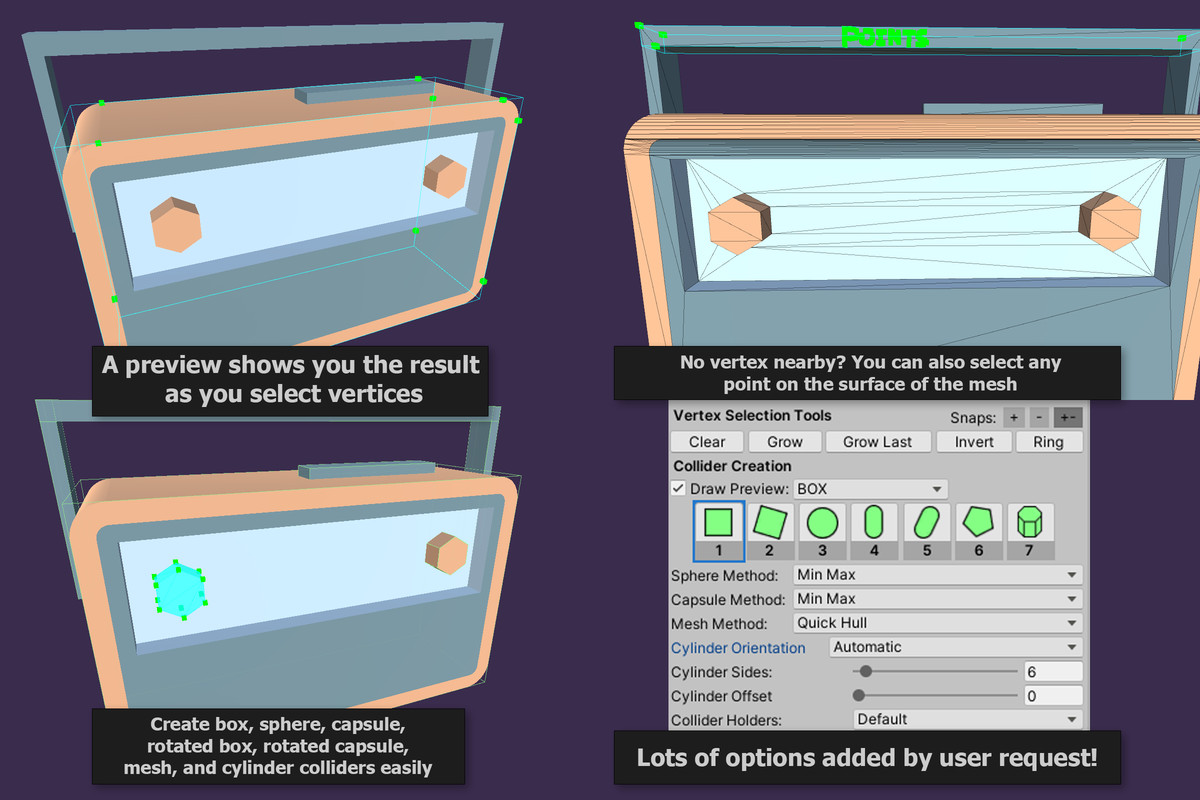 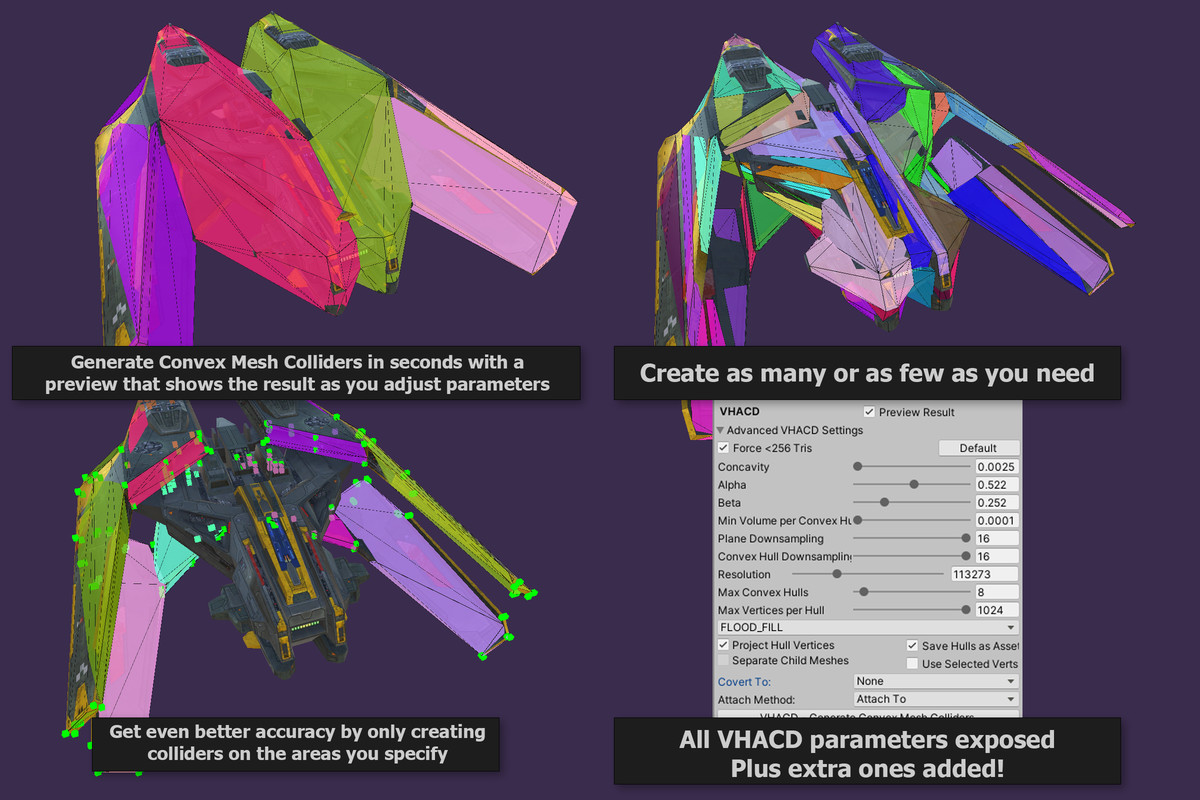 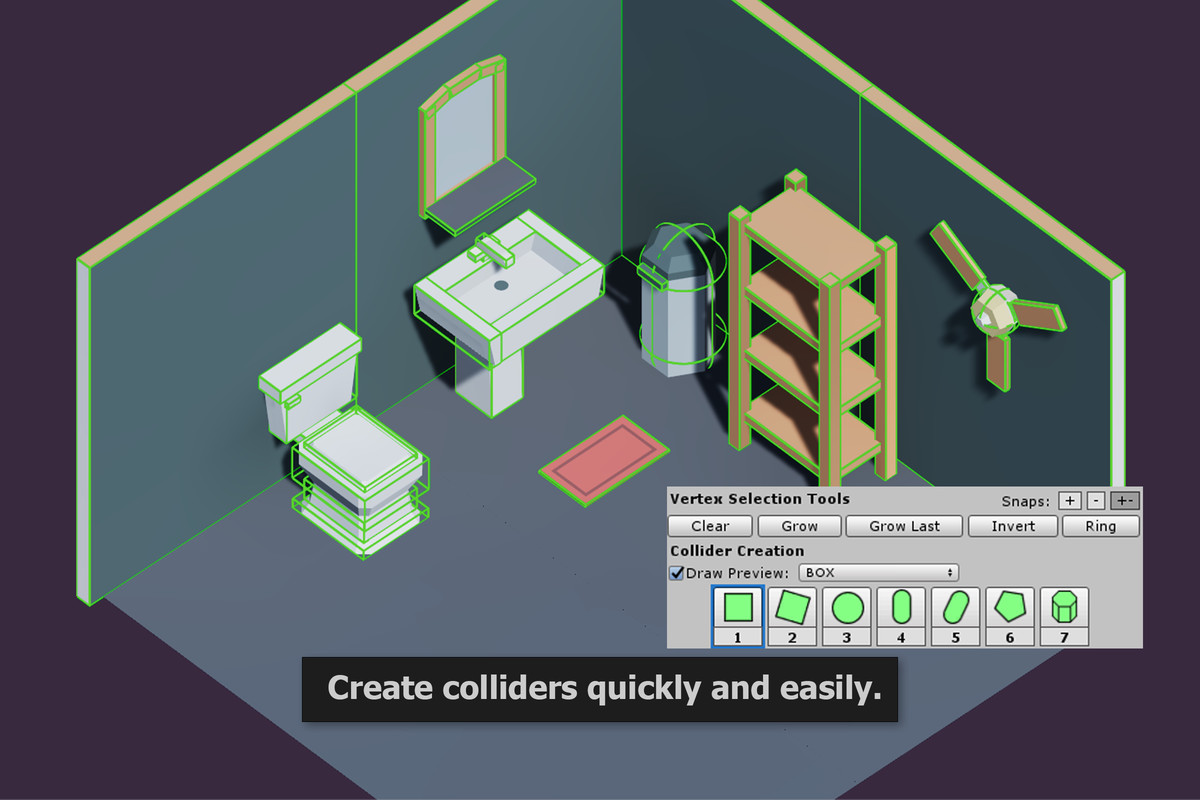 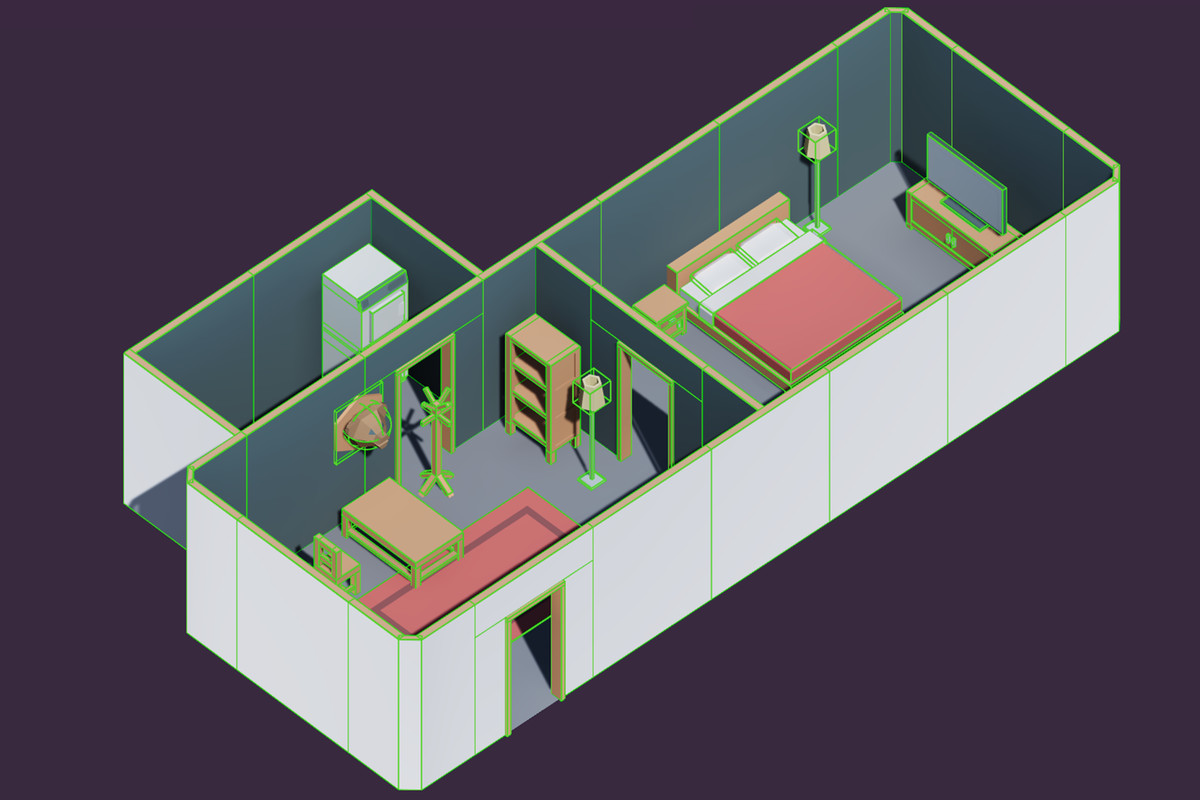 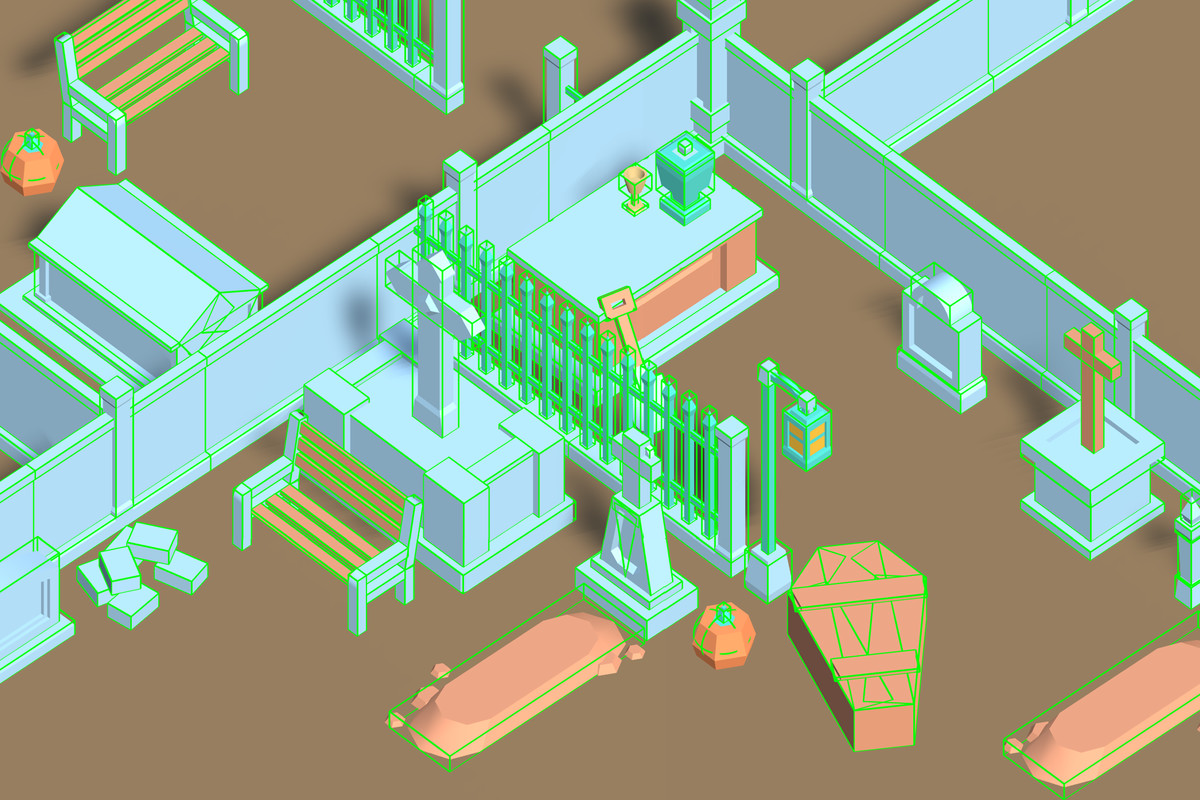 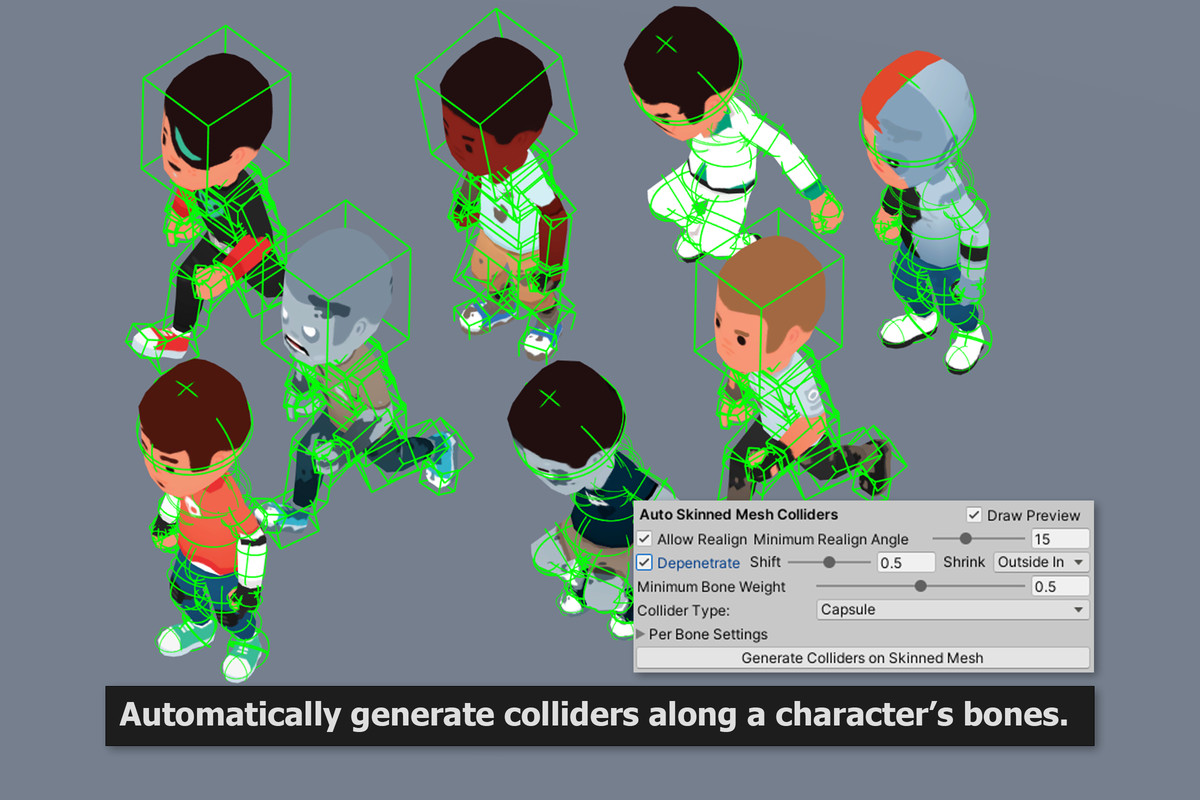 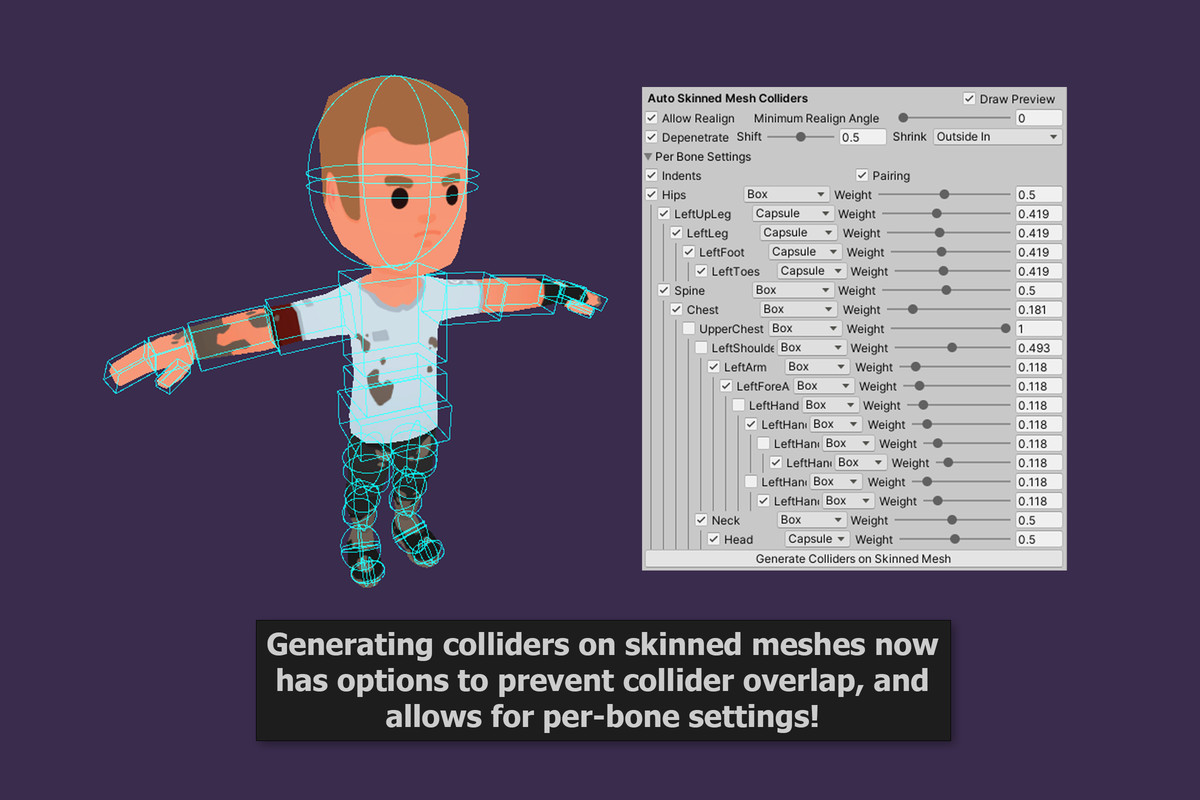 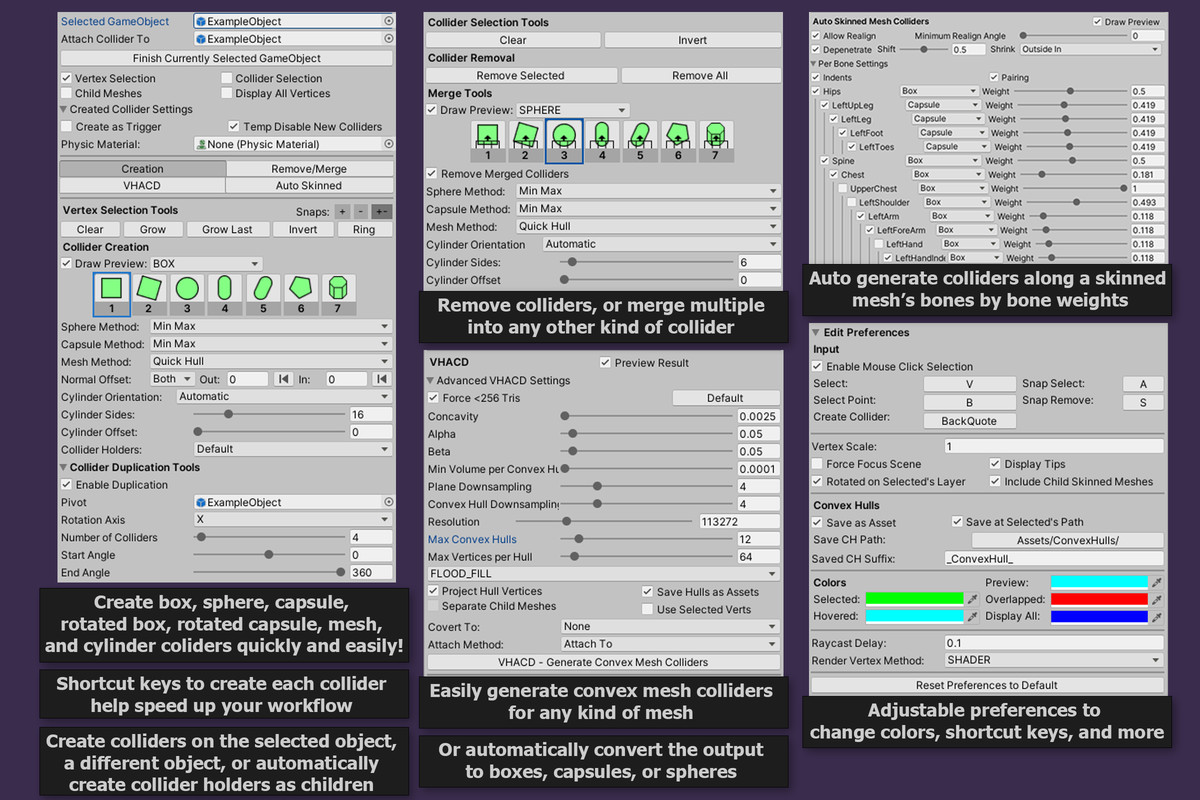 Having trouble getting accurate physics and colliders?

Can't visualize what the result will be?

A helpful preview shows you the result as you work. You can even switch between the previews with shortcut keys, and create a collider from the current preview with a double tap or a single key press!

Just want to use convex mesh colliders on everything?

Use the VHACD plugin to automatically create as many convex mesh colliders as you want. You can even convert the output of VHACD automatically to boxes, spheres, and capsules, or convert individually using the collider merge tools.

Don't want to create colliders for a character?

Automatically create boxes, capsules, spheres, or convex meshes on a skinned mesh's bones with a single click of a button!

A lot of features like the cylinder collider, extra vhacd settings, previews, and more were all added at the suggestion of users. Let me know what you'd like to see!

A helpful preview is drawn as you select points to make collider creation even easier. Shortcut keys let you swap between previews and create a collider from the current preview. Other options include letting you to decide how the created colliders get attached, the ability to shrink or grow the resulting collider, and the option to create multiple colliders around a pivot point.

Another feature in Easy Collider Editor is convex hull generation using VHACD. This lets you automatically generate multiple convex mesh colliders on any mesh with a simple click of a button. Using multiple convex mesh colliders lets you better represent the shape of the mesh while still allowing physics and rigidbodies to work correctly. All VHACD parameters are exposed and easily adjustable, and a preview of the result is calculated and displayed as you work. Additional options for VHACD allow you to use only selected vertices, process meshes individually, and convert the output automatically to boxes, spheres or capsules.

Easy Collider Editor can also automatically generate box, capsule, sphere, or convex mesh colliders along a skinned mesh's bones. Parameters for this let you exclude vertices by weight, automatically realign colliders with the bones, and prevent collider overlap. The new per bone settings also give you the options of toggling bones, changing colliders, and adjusting weights for each bone.

DOTS with the Unity.Physics package is also supported. A package is included that adds Physic Shape parameters and a button to the UI. These can be used to convert the normal Unity colliders created by Easy Collider Editor into Physic Shapes.