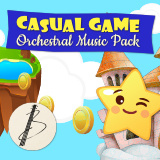 This pack is made of two songs with versions in 30 seconds and 60 seconds, for timed games, and a looped version of each song, with Win and Lose song for finishing the stage. The timed versions' last note hits the last second mark (let's say, for the 30s version, the last note marks the 30th second. There are also 7 musical sound effects included (with 2 variations each) plus 2 musical countdowns for each stage (the wav length is 4s in case you need an additional "GO" before the song starts) The 30s version of the song has a slightly faster rhythm than the looped version, so you can use it to make it a "hurry" version, in case you have a timed game with more than 60s. Song List: Main Menu Stage 1 - 30 seconds Stage 1 - 60 seconds Stage 1 - Looped Stage 1 - Win Stage 1 - Lose Stage 2 - 30 seconds Stage 2 - 60 seconds Stage 2 - Looped Stage 2 - Win Stage 2 - Lose SFX List (there are two versions of the same sfx) Action Cancel Collect Confirm Countdown Hurry Power Down Power Up