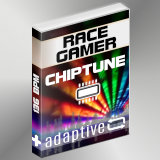 "Race Gamer" is a unique and immersive chiptune soundtrack with 136BPM. The adaptive soundtrack is suitable as dynamic game level music, main menu music and background music in many video projects or your trailer.

To customize the royalty-free adaptive music soundtrack to your game scene or video, the package also contains the single tracks. You can rearrange the soundtrack according to your own ideas and requirements. The song in this pack offers much more flexibility than ordinary soundtracks. The ready-made mix are also included.

The soundtracks and single tracks I developed are a free and modular construction kit. You can simply use the single tracks directly to create an adaptive experience in your video games. With fade-ins and fade-outs it is possible to adjust the music adaptively according to the principle of vertical layering.

But my soundtracks also allow another possibility for editing. This further possibility is horizontal re-sequencing. This means that you can create your own sequences and loops with the single tracks that perfectly match your video game. Like a mood, a different game level mode or goals achieved.

My goal is to offer the full range of possibilities with the modular system. With any digital audio workstation you are able to create all kinds of intros, loops, transitions and outros suitable for your project. Of course you can use the audio files you create in this way in all tools that specialize in the integration of adaptive music soundtracks.

All soundtracks are tested in various situations like smartphones, tablets, headphones, pc and tv speakers, caraudio-systems and professional mixed to have a good sound in all of them.