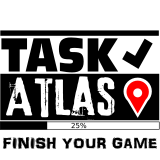 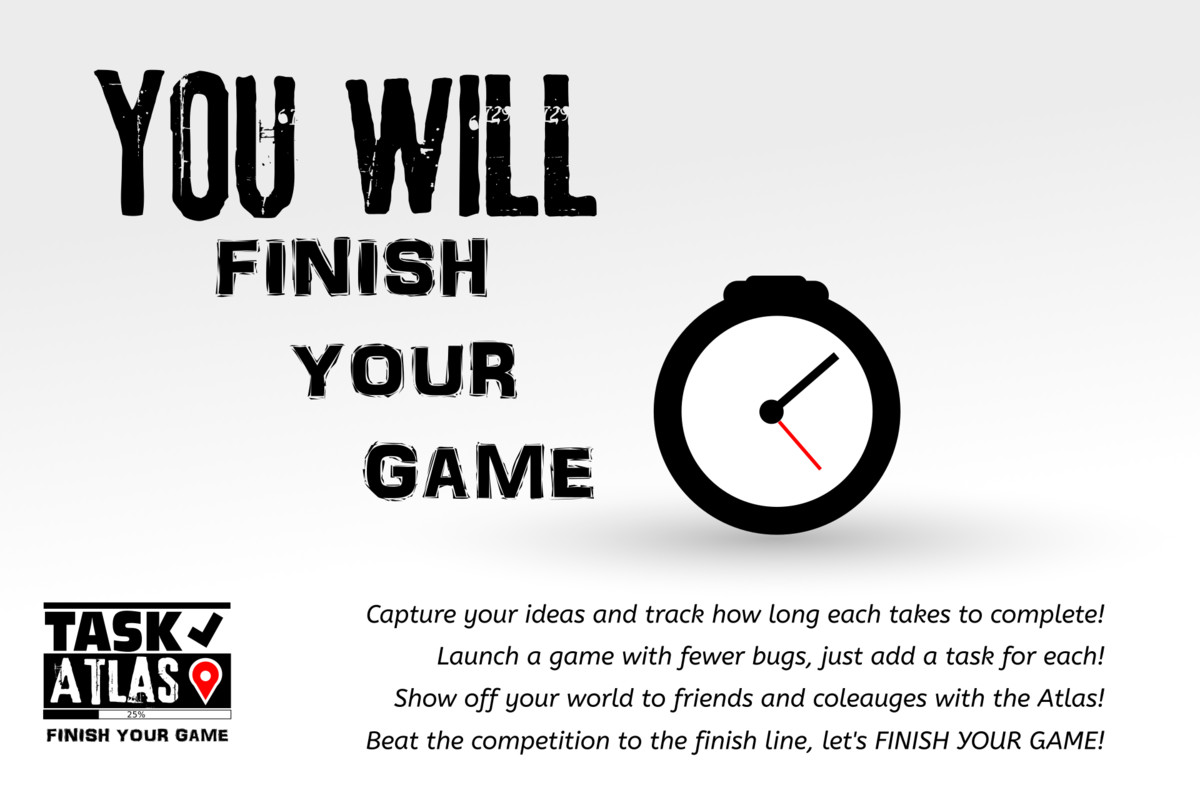 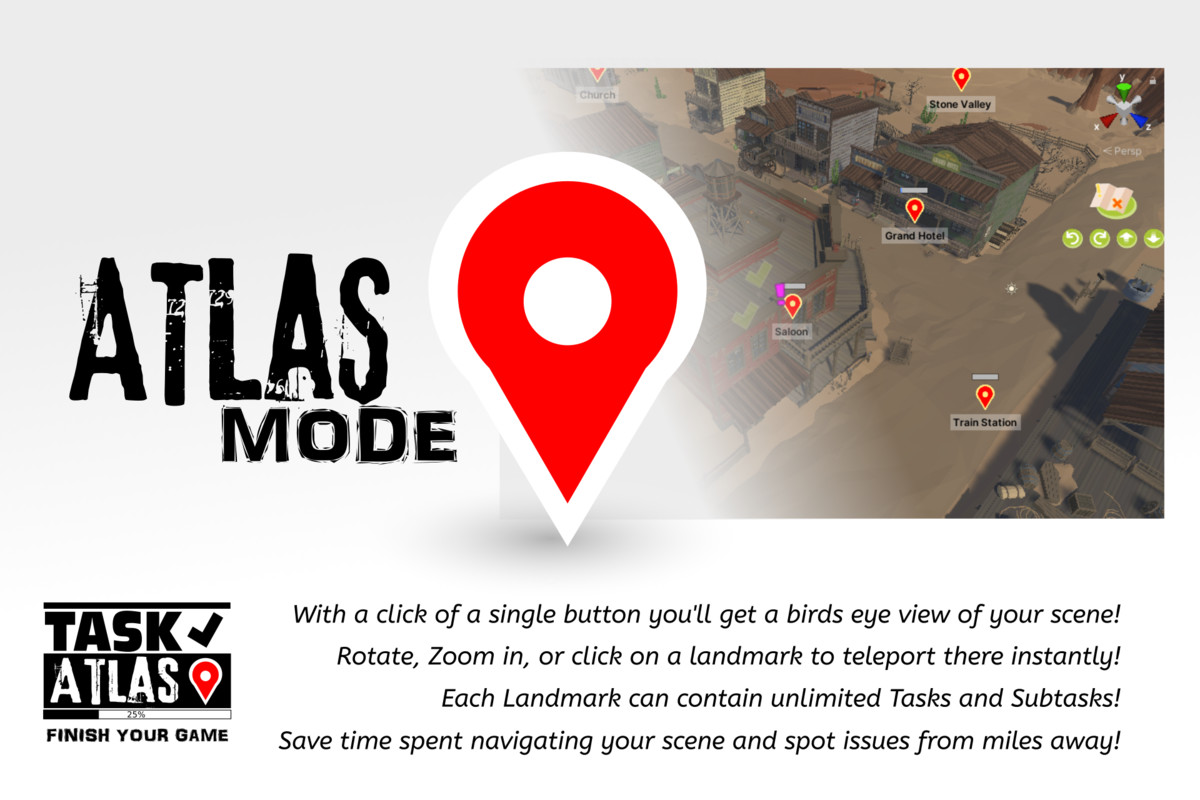 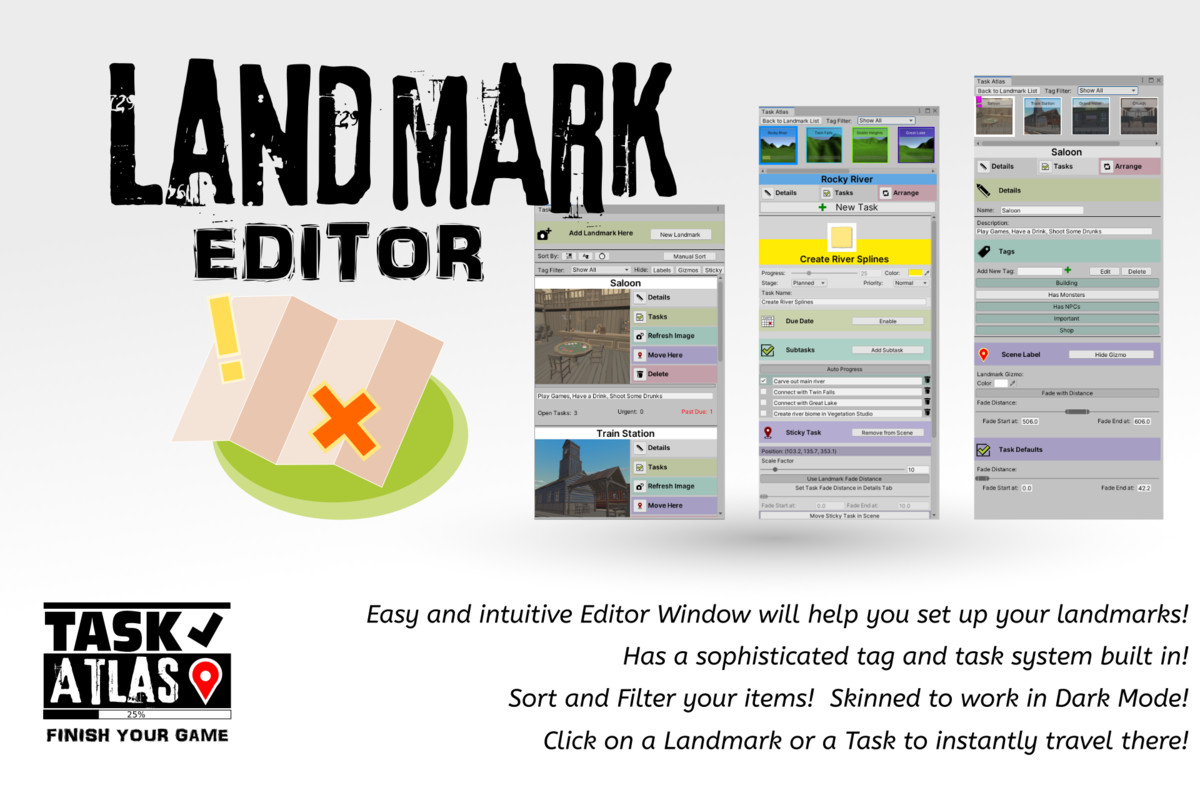 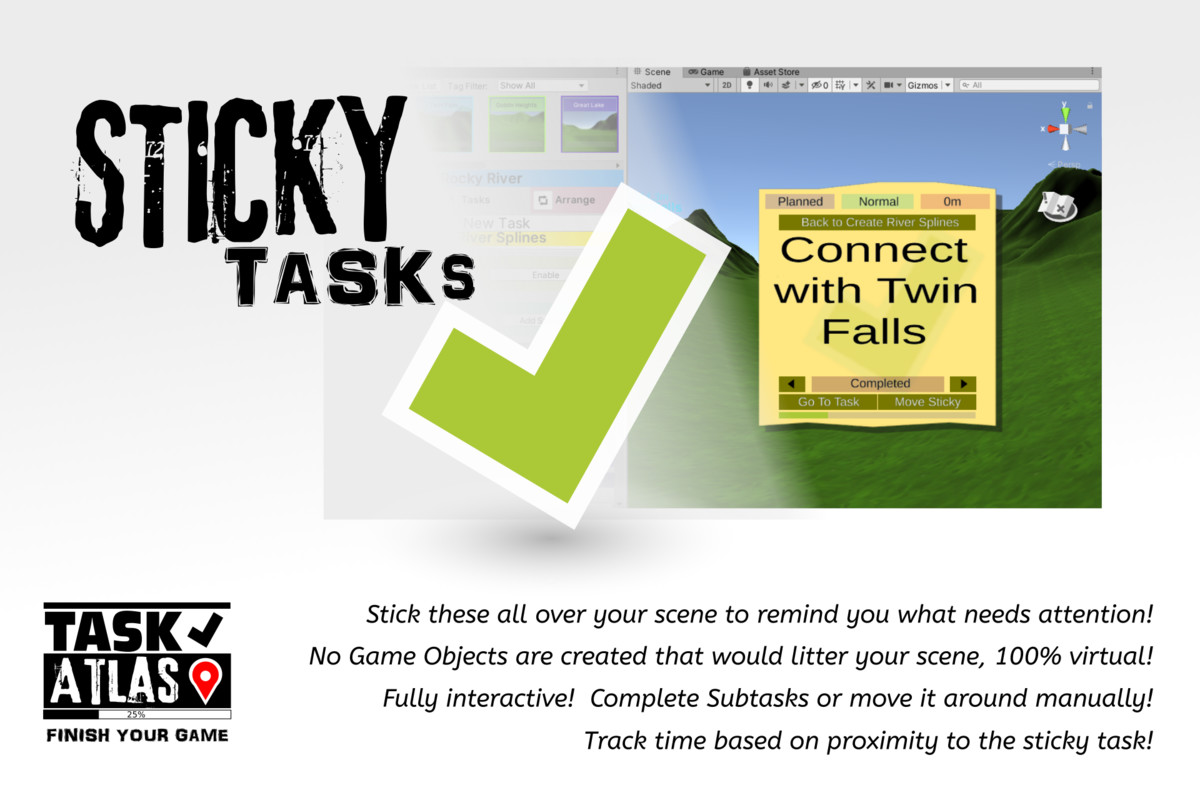 Join the hundreds who have trusted ShrinkRay Entertainment to make their game development experience more meaningful and fun.

FINISH YOUR GAME with Task Atlas!

NOW WORKS FOR BOTH 3D AND 2D PROJECTS

Introducing Task Atlas! The most unique Project Management tool for Unity! Finally, put your thoughts where they belong, right inside your scene!

Take a journey with me to the lofty peaks of Frostmoar down to the dankest dungeons of dread. We’re not going to bring a map or write a plan about where we need to go next. Will we finish this quest?

Let’s film a movie about a lost princess who gets rescued by a chubby Italian. We aren’t going to write a script or storyboard a single scene. Will theatres ever see our masterpiece?

Let’s make a game in a super competitive market, but not make notes about all the awesome ideas we have that will make us stand out from the crowd. Will we finish our game?

With Task Atlas, you will!

You have great ideas, right?

Your concept is revolutionary?

You want your players to have fun?

You want to be interviewed one day about how you made such an awesome, exciting game?

Then don’t let your revolutionarily fun ideas vanish from your mind as you inevitably trudge away in a long development cycle.

A goal without a plan is just a wish. - Antoine de Saint-Exupéry

Planning is bringing the future into the present so that you can do something about it now. - Alan Lakein

Every minute you spend in planning saves 10 minutes in execution; this gives you a 1,000 percent return on energy! - Brian Tracy

One of the biggest lies I tell myself is, “I’ll remember it, I don’t need to write it down. “ – Everyone.

You won’t go to the grocery store without a list but you’re not worried about making a video game without a task manager specifically designed for that purpose?

Of course, that’s not true. Of course, you agree that you need a place to download your mind and save it for later.

Let me guess, you’ve done at least 2 of the following:

None of these are bad ideas. (Except notepad, do not plan your entire game in notepad.) But there’s something missing in all of these.

Can you guess what it is?

They’re all OUTSIDE OF UNITY. That’s like writing a grocery list then calling your wife (or husband) to read it for you as you shop. Grab the chips, hang up. Call back. Hang up. Call back. Hang up. That’s ridiculous! But that’s what you are doing RIGHT NOW. Every time you have to switch between the editor and some third party program to jot your thoughts down, you are spirited away from one world to another.

Don’t you wish you could just capture your thoughts right where they’ll ultimately materialize?

Don’t you wish you didn’t have to leave the level in order to plan the level?

Laugh a little because it’s so obvious, it’s been right in front of you this whole time:

Don’t you wish you could plan your scene while you design your scene?!

Listen, you’ll still need to plan other things, and all the above ideas (except notepad!) are still fantastic for planning legal, marketing, staffing, product launch, press releases, etc. But you know it, I know it, everybody knows it… these just plain suck at planning your level.

Tell me I’m wrong. I see you there. You just wrote up a category, in some other project management program, called “Dark Forest of the Rusty Runes” and ten tasks such as “Draw some cool rune art”, “Write a backstory on how the Runes got rusty in the first place”. Awesome. But now it’s three months later and while playing around you went a totally different direction. It’s now a fairy forest of magic mushrooms. Did you update your notes? Be honest. I said be honest. Nope, you’re probably heading into that mysterious program right now and deleting all those notes, pretending you never wrote them, and are quickly jotting down your ideas for the fairy queen, hoping no one notices.

Two things just happened. First of all, because your notes were external, you got wildly off track. Sure, sometimes that’s ok, but we have deadlines! We have a hoard of fanatics that are chomping at the bit to play the game you keep dropping screenshots for on twitter. We need to deliver!

Second, you didn’t keep your plan up to date.

Here’s a big misconception about plans. Everyone thinks if you write it down, that’s that and now you just deliver on it. You ever hear the saying, “The best laid plans are laid waste the first day of the battle”? Plans aren’t static, they evolve and adapt, a good General will strike and counterstrike. If your planning tool isn’t there for you exactly when things need to change, guess what? It’s too late. Next thing you know you’re flailing, you’re improvising, you’re lost!

Unless you’ve only been developing for 21 days, you know exactly what I mean.

So then, yes, we should plan our Unity scenes directly inside Unity, right?

If only we could?

If only there were an asset that let us place Landmarks in our level, write notes within it, literally stick notes about where to place the boss literally where the boss should be placed?

Of course, it better let me set priorities, track progress levels, and even warn me if a critical task is past its due date.

That alone would be exactly what you need. But you want more. I get it, the above would be useful, critically useful. Sure. But let’s be honest. It’s still boring. If only task management could actually be fun and motivating?

Impossible! Heresy! To the asylum!

Call me crazy, but Task Atlas actually did the impossible. I made making your game as fun as playing a game. And it’s not just a slick gimmick either, these enhancements bring this snazzy little task manager to a whole dimension that no external organizer can dream. Why? Well, I just gave your world its very own interactive Atlas!

What does that mean?

No longer will you be sailing the endless seas of game development without a map. With a single click, all those precious thoughts of yours get geospatially placed before you. As you look down upon your creation--like the demigod you are--you may notice half your map is missing trees, rivers, rocks, Monsters, and all the other cool things that make your game, well, cool!

And while you work away, dropping models here and there, you’ll always know that the village is to the left of you and ahead is the Murky Meadows. That’s because you turned onscreen labels on. In fact, you know the meadows are exactly 142 meters away. Awesome! But don’t worry, you won’t have to walk there, just click the screenshot a KA-ZAM! You’re instantly in the murkiest of meadows!

Here’s the deal. I said above we are going to go on a journey, and we are! And now we have plans and a map. But I also said WE. Task Atlas is in constant development and I’m here to work with you. Anything vital that’s missing, or if you spot any features pretending to be bugs, I’m a click away! Go read the reviews, I am PASSIONATE about helping you finish your game.

BECAUSE I WANT TO PLAY IT!

So get back to work, I’ll see you on the other side!!

Here's how Task Atlas will help you overcome the odds, keep you motivated, and inevitably lead you to rockstar success and the adoration of all those who ever dared to roll their eyes at you.

Email me at shrinkrayentertainment@gmail.com and I will respond quickly!

Join the hundreds who have trusted ShrinkRay Entertainment to make their game development experience more meaningful and fun.