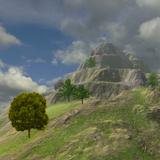 The main use of billboard shaders is to replace complex three-dimensional models (grass, bushes, or trees) by two-dimensional images. You can replace your 3D trees with a transparent image of a tree when they are far from the camera. Just create a material from this billboard shader and use your texture. Some sample tree textures included in the package.

- All billboard shaders react to lights in realtime. Compatible with day/night lighting cycles.